WARNING: Some spoilers may be bound but I try to keep them light.

Intro
While pouring back through all the Tarantino films recently I realized a couple things:
1) There's not that many of them. I mean he's only one guy and he pretty much only works off of his own material that he wrote... which takes time, and thus this is very understandable.
2) His films make reference other movies constantly. Now call it what you want homage, reference or just plain theft but I'm thinking that a lot of people don't catch the majority of these references to other films because frankly, we don't have the film same exposure as a young Tarantino did going to the grindhouse theater constantly in his youth or working in a video rental store. However, hypothetically with the vastness of the internet and Amazon, Netflix etc. these films should be easier to get a hold of today, if you know what you're looking for that is.

So I figured there's probably more people out there, like me, who crave more Tarantino constantly and I could showcase some films that I'd consider essential viewing for Tarantino fans. And thus the 10 must-see films for Tarantino fans was born. Now let me warn you this is in no way a comprehensive list and there's no particular order to these either. There's probably hundreds of films that Tarantino references in his own films, and I found enough films I could write about to probably do this series again but that will have to wait until next time there's another big Tarantino release.

Quentin Tarantino has said that his most recent film Django Unchained (2012) is a tribute to the work of Sergio Leone and Sergio Corbucci, the second being the director of this film. When Django came out it was a smash hit and supposedly has over 40 unofficial sequels or spin offs and Tarantino has said that his film is continuing in that tradition. The main character is named Django (obviously) as a tribute to this film, and the soundtrack borrows 5 songs from this film including it's title song, "Django." And Franco Nero, the original Django makes a small but awesome cameo in that film. Quentin Tarantino also lists this film, third in his top 10 spaghetti westerns only behind the second two films of The Dollars Trilogy(thanks to The Quentin Tarantino Archives).

Well, that's it for the 10 must-see films for Tarantino fans. I hope you enjoyed yourself and learned something new, I know I did! 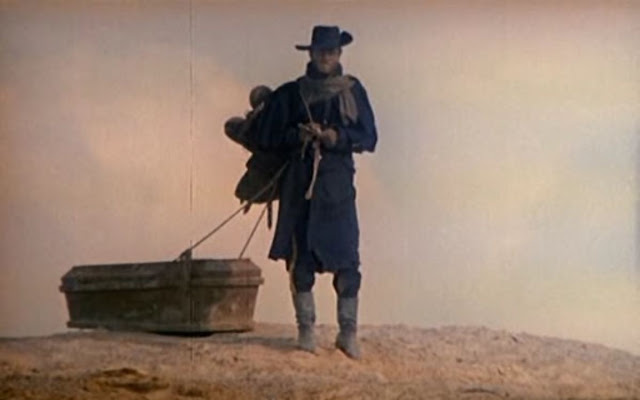 Django is an Italian-Spanish spaghetti western by director Sergio Corbucci. The film is set after the American Civil War, when a mysterious drifter rolls into a Southern town dragging a coffin he finds himself caught in a war between a racist ex-Confederate army and a band of Mexican revolutionaries, but he'll find he actually has history with both sides.

[This review will focus on the English-dubbed release that was released in the U.S.]

The characters and actors in this film are all surprisingly decent in this film. I found them all interesting and believable. I especially liked the introduction of the Southerner, Major Jackson who captures Mexican soldiers just to let them run free one at a time then use them as target practice. That really sets up a great antagonist that you really hate right out.

As you would expect, the dub is pretty bad for this film.

I didn't care for the "romance" of this film, luckily it wasn't focused on too much. But I need to see the original, because it's possible that the dubbed dialogue might be at fault for a majority of this. I felt like I understood what they were trying to do but it just wasn't as effective as it could have been. As it is now it seems really sloppy and corny.

I really can see why the character Django (and this film) has over 40 unofficial spin offs. The character is just really cool. He's an former Union soldier who has become a drifter and drags a coffin behind him through the mud, and I love how throughout the film people keep guessing why he has a coffin too; Asking if he's an undertaker, a coffin-maker, if there is someone inside or he's carrying it around for himself. And I'm glad the contents of the coffin weren't saved until the climax of the film either because I was told what it was when I first heard about the film [i.e. I'm glad it wasn't saved for the end like the twists of Planet of the Apes (1968) or Soylent Green (1973)]. And Franco Nero really blew me away too, apparently Sergio Corbucci found him working at a gas station and then turned him into an international star! He's got a great face, really awesome blue eyes and his acting in this film seems like a cool cross between the nonchalant Man with no Name character by Clint Eastwood and the typically righteous John Wayne character.

I like Luis Bacalov's score a lot in this film, his scores are not as often parodied or referenced as Ennio Morricone's work but they're just as effective, exciting and powerful.

I really enjoyed the direction of this film. The staging of all the action is really well placed, the cinematography is really simple and straightforward but very effective. I like how the Corbucci would really speed up the cuts during the intense action sequences so that you think you see more than you do. This is also double effective in the gory or bloody scenes where your mind just fills in the blanks and covers for anything you didn't actually see.

The world of this film is very original. How come in all the westerns I've seen I've never seen a western town after the rain so that the characters are just trudging through thick mud? I love the cloudy, overcast, abandoned and beat-up town that a majority of this film takes place in. It looks so much more "real" than all the American westerns, it really shows great thought (whether or not the mud was actually intentional or not!).

The story of this film is really great too. I like how this film kind of sneakily deals with the American Civil War and things that would have been relevant during this time without being too overt about it, the Klan substitute is a perfect example of this. I love all the twists and turns the story takes along the way, it's very original and clever and it just makes you feel so good afterwards. It really is an exciting film. 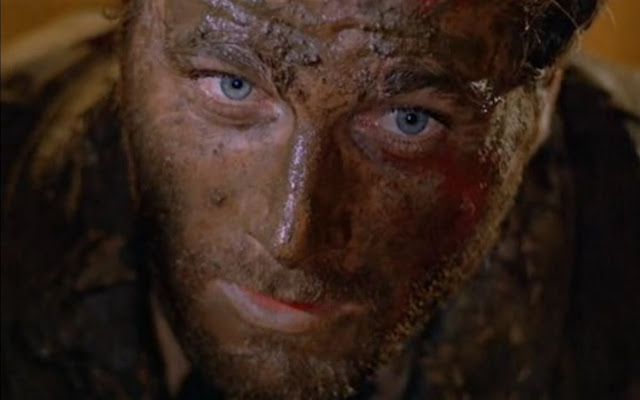 Django (1966) is a unique take on the western that's really exciting and at the same time very cool. Highly recommend. 5/5 Stars. 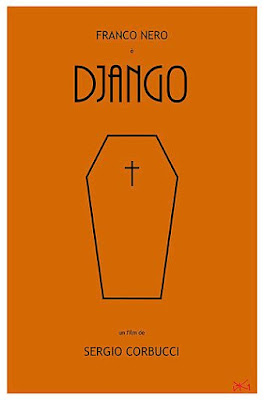 Check out this original minimalist poster design I did for this film, click through to buy prints/posters etc. OR check out other movie posters I designed here. :)

This film is part of my month-long Tribute to Tarantino in honor of his latest film Django Unchained (2012) and his 20-year career. If you've missed any of my reviews so far, be sure to check out his filmography and click on any film you've missed.

And that's it for the 10 must-see films for Tarantino fans countdown thanks for reading!

Like this blog? You can support it by buying this film through these links: